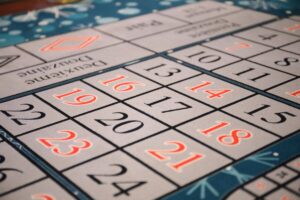 Bingo, a.k.a. lotto, is a classic game in which players check off numbers on a physical, or electronic bingo card as they are called, at random, by a caller or host. The winner is the first player to complete a prescribed pattern, such as one, or two, horizontal rows, or all the numbers on the card, a.k.a. a ‘full house’.

Traditionally, so-called ‘cash bingo’ is played for cash prizes made up of a players’ stakes, minus playing fees, while so-called ‘prize bingo’ is played for prizes, of various forms, which are not directly to the number of players or players’ stakes. As far as casinos are concerned, neither form of bingo is particularly lucrative, but the social aspect of the game appeals to a wide demographic and its popularity endures.