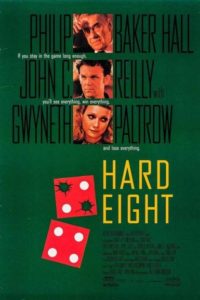 Originally titled ‘Sydney’, after the main protagonist, played by Philip Baker Hall, ‘Hard Eight’ is a 1996 crime drama film, written and directed by Paul Thomas Anderson. For the uninitiated, in casino craps, a shooter can roll an eight with two dice in one of five ways, two and six, six and two, three and five, five and three or four and four, but only the latter is known as a ‘hard eight’ and pays odds of 9/1.

Although set in contemporary, modern times, ‘Hard Eight’ features a tough, morally ambiguous main protagonist and a bleak, cynical outlook, characteristic of the filmmaking style known as ‘film noir’. Indeed, Paul Thomas Anderson conceded that the 1956 French gangster film ‘Bob Le Flambeur’, which is considered a film noir, was a major influence on ‘Hard Eight’, which is sometimes described as ‘neo-noir’.

The aforementioned Sydney, an aging, but apparently affable and successful, professional gambler, first encounters confirmed also-ran John (John C. Riley) at a diner in the middle of the Nevada desert but, having befriended the younger man, offers to show him the tricks of the trade. Back in Reno, John initially earns himself a complimentary room with the so-called ‘rate card trick’ and, over the next year or two, develops into a successful small-time professional gambler in his own right.

John falls for, and eventually marries, Clementine (Gwyneth Paltrow), a cocktail waitress and occasional prositute, and befriends Jimmy, a vulgar casino security man. Jimmy later holds Sydney at gunpoint and threatens to reveal that he killed John’s father unless he pays blackmail. Jimmy demands $10,000, but Sydney agrees, and later pays, $6,000. Jimmy plays craps with the money, winning $18,000 courtesy of a $2,000 bet on a ‘hard eight’ but, on his return, Sydney reveals his treu colours, shooting him dead and recovering his money, with interest.