Movies – The Color of Money 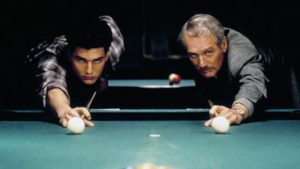 ‘The Color of Money’, released by Touchstone Pictures in 1986, was the sequel to ‘The Hustler’ and, once again starred Paul Newman, reprising his role as ‘Fast’ Eddie Felson, 25 years after his final showdown with Minnesota Fats in the original film. Minnesota Fats does not appear in ‘The Color of Money’, but Tom Cruise co-stars as Vincent Lauria, a talented protégé, not unlike Felson in his early years.

Together Felson, Lauria and his manipulative girlfriend, Carmen (Mary Elizabeth Mastrantonio) embark on a tour of less-than-salubrious pool halls across the Midwest from Chicago to Atlantic City, where the professional ‘Nine-ball Classic’ tournament is their ultimate objective. Felson tells Lauria, ‘Pool excellence is not excellent pool’, but Lauria has difficulty coming to terms with his words of wisdom and insists on flaunting his talent at every opportunity, including, on one occasion,

to the accompaniment of ‘Werewolves in London’ by Warren Zevon, much to the dismay of his mentor. Felson and Lauria fall out and part company, at which point Felson comes out of retirement and resumes his previous career as a pool hustler.

Inevitably, their paths cross again when they come face-to-face in Atlantic City. Felson wins their match, only to learn that Lauria ‘dumped’, or intentionally lost, as part of a betting scam. Lauria gives $8,000 out of his winnings, but Felson forfeits his next match and returns the money. Felson requests a private rematch, in which, just before breaking off, he looks Lauria in the eye and tells him, ‘I’m back!’

After watching the movie, you might want some action yourself and Starburst has been making money for players since 2012. Get off to a great start with starburst free spins.