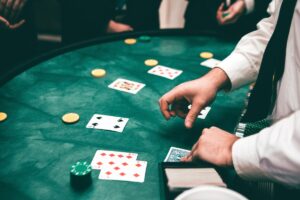 The late Tommy Carmichael was a television repair man-turned-inventor, who devoted nearly twenty years of his adult life to devising innovative ways to cheat slot machines. Carmichael began his life of crime with a nuts-and-bolts device, known as a ‘top-bottom joint’, to which he was introduced in the early Eighties. A crude affair, consisting of a curved piece of metal and a guitar string, the top-bottom joint effectively short-circuited the coin hopper of older, electromechanical slot machines, causing an illicit payout. Carmichael was arrested, convicted and sentenced to five years’ imprisonment for using the device in Las Vegas in 1985.

He served just two years in prison but, on his release in 1987, slot machine had become more sophisticated. In response, Carmichael acquired a state-of-the-art machine and created a novel cheating device, known as the ‘slider’, or ‘monkey paw’, which was effective against the latest technology. Again employing a guitar string, together with a piece of sprung steel, the slider could be inserted into the payout chute, tripping a microswitch and causing the illegal release of coins from the hopper.

By the early Nineties, slot machine technology had moved on again, rendering the slider obsolete. Nevertheless, posing as a prospective buyer, Carmichael examined the inner workings of of a cutting-edge, computerised machine and devised a fresh device, known as the ‘light wand’. As the name suggests, the light wand employed a miniature light bulb powered by a camera battery – making it nigh on undetectable – and effectively ‘blinded’ the optical payout sensor when shone into the machine.

Carmichael was subsequently arrested in 1996, 1998 and 1999, on the latter occasion pleading guilty to running an illegal gambling enterprise, for which he was sentenced to time served plus three years’ probation. He died, at the age of 68, in 2019, but for the last 16 years of his life his name appeared on the Nevada Gaming Control Board List of Excluded Persons, a.k.a. the ‘Black Book’, so he was officially banned from every casino in the state.