Ad Space on Your Face 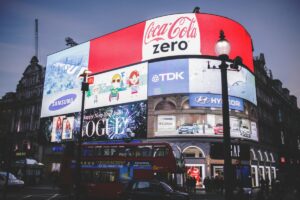 We live in a pretty world time. Political turmoil the world over, growing environmental concerns, a pandemic.  As it has sometimes been said “There are decades where nothing happens, and there are weeks where decades happen“. But even after all of the current madness is factored in, my mind still returns from time to time to the woman who had GoldenPalace.com tattood on her forehead.

While I would usually commend companies for thinking ‘outside of the box’ with their advertising campaigns, whoever decided to go along with this idea was clearly on a wind up that went a step too far. Not only was it ill-advised on their part, but clearly the woman in question, 30 year old Kari Smith, can’t have been the full ticket either. Admittedly it was inventive of her to come up with the idea of auctioning off advertising space on her own forehead, but the reality of the result is perhaps more a combination of sad and strange.

The winning bid of $10,000 resulted in her having the website address GoldenPalace.com written on her forehead in permanent black block letters. Smith pledged to use the money for her son’s education, so there was at least one sane decision made during this process. She remained adamant throughout said that she didn’t have any regrets about getting the forehead tattoo. Much to my amusement there is, in fact, an entire Wikipedia page dedicated to forehead tattoos.

The question on everyone’s lips though, must now surely be ‘does she still, to this day, have the tattoo?’. It’s now 15 years since that fateful day, and *drumroll* I can confirm that in 2012 GoldenPalace.com actually paid for her to have the tattoo removed. They no doubt wanted to step back from their more controversial advertising strategies. In the early 2000s this included paying multiple individuals, not just Smith, to get forehead and body tattoos of their web address.  They also paid $28,000 for a cheese sandwich on eBay  alleged to have the image of the Virgin Mary on it, and paid a woman $15,199 to have her name legally changes to GoldenPalace.com!