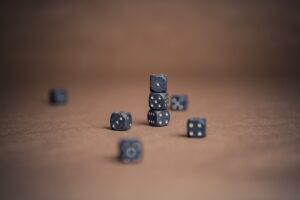 Craps is a gambling game played with two dice. The game was introduced to New Orleans by the French in the mid-nineteenth century, when it was originally known as ‘Crapaud’s dice’; historically, the nickname for any Frenchman was ‘Johnny Crapaud’ or ‘Johnny Toad’. In the meantime, craps has evolved to become arguably the most common game of its kind in the world.

Craps is played on a dedicated table, typically 12′ long and surrounded by high walls, with rubber pyramids on the back wall to prevent so-called dice control, or precision control. A distinctive craps layout, showing all the various bets available, of which there are literally dozens, is stencilled onto the bed, or ‘floorette’, of the table. A craps table is supervised by a casino employee known as a ‘boxman’. Another employee, known as a ‘stickman’ calls out the roll and returns the dice to the player throwing them, a.k.a. the ‘shooter’, while one or more other employees, known as ‘dealers’, take the bets.

The game of craps is structured around a bet known as the ‘pass line’ bet, which pays 1/1 if successful and offers a competive house edge of just 1.41%. The first roll of the pass sequence is known as the ‘comeout’ roll. A comeout roll of 7 or 11 wins a pass line bet immediately, but 2, 3 or 12, a.k.a. ‘craps’, loses immediately. All other totals establish a target, or ‘point’, which the shooter must roll again before rolling a 7 for the pass line bet to win.