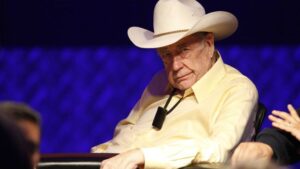 We all know more or less about Doyle Brunson who is a very good poker player. He is still one of the best poker players in the world and perhaps the biggest idol of poker. The man has won the World Series of Poker Main Event championship, two times and is an author of many poker books.

Doyle was a very bright Basketball player and was a representative of the All-State Texas Basketball team. But a terrible injury in his knee ruined his basketball career. Brunson had begun playing five-card draw before his injury and from that time his skill in playing cards has been revealed. After his graduation, he got a job. The amusing matter is, on the first day of the job he was invited to play a Seven-card stud game and earned more than a month’s salary. After a while, he left the company and become a professional poker gambler.

Brunson started by playing in illegal games usually organized by criminals where rules were not enforced. Brunson and his friend Dwayne have been robbed several times by those criminals. They traveled to Texas, Oklahoma and Louisiana, started joining in bigger games. Brunson eventually settled in Las Vegas and became a regular poker player of WSOP.

He continued to play the biggest poker games worldwide ranging from $4000 to $8000 limit in Bobby’s Room. Being the first player to win $1 million in poker tournaments he was advancing his playing skills and has won 10 WSOP bracelets throughout his career life.

Net worth and Earnings of Doyle Brunson till 2021

Doyle achieved huge fame and fortune during his poker professional life. In 2018, he retired and in the same year, he earned $10000. He is also an author of ‘Super System’ published in 1978. This book contains all tips and guidelines for the poker game. The majority of his earnings come from cash games and the book super system. The net worth of Doyle Brunson in 2021 is approximately $80 million.

Doyle F. Brunson played poker professionally for over 50 years and now he is an 87 years old retired poker player. Something remarkable for someone of his generation, Doyle has a very active Twitter account. Brunson tweets his thoughts on poker and other general opinions in the Twitter community. He also shared his view and outlook about online poker there. He has a lot of follower on Twitter and most of them are the greatest fan of the Poker game.