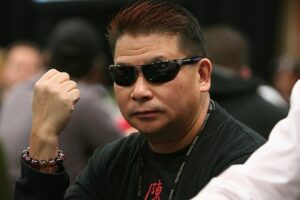 Although he has not been in the limelight for a while, there are names that you don’t just forget, and one of them is Johnny Chan. He has been in the gambling field for years, and his achievements are hard to forget. So far, he had won the World Series of Poker bracelets 10 times. As far as live tournaments are concerned, the poker player has pocketed millions of cash prizes and had also been allowed into the Poker Hall of Fame. That said and done, let’s discuss this legend even more.

This poker player was born in 1957, and his place of birth was Guangzhou, China. At around the age of 5 years, in 1962, he and his family relocated to Hong Kong. That was not the end of their relocation since they also left for Phoenix, Arizona, and Houston, Texas, in 1968 and 1973, respectively. His family has restaurants, and Johnny Chan saw it as an opportunity to venture into the gambling sector. He would play cards with the workers.

In the beginning, Chan may have been tempted to join the footsteps of his family member. That’s probably why he was pursuing hotel and restaurant at the University of Houston. However, his love for gambling overpowered the dream leading to him dropping out of school at the age of 21 to pursue his career as a professional gambler. It is important to note that Johnny once visited Vegas at the age of 16 and went to a casino where he won big.

Eventually, he also gave hospitality a shot, and he runs the Stratosphere Hotel in Las Vegas. He is also married and a mother of 6.

Supposedly, as early as 16 years, Chan had made $20,000 from $500 in a casino for a night. Unfortunately, he lost $20,000 the following day. However, that did not stop him from giving poker a shot. Ever since he became a professional poker player, he has earned 10 WSOP bracelets and had also played in the World Poker Tour. Until recently, it has been a win after win for Johnny Chan. However, it seems like he took a break because he hasn’t been in the limelight for a while.

When the names of poker players are mentioned, Johnny Chan is least likely to miss. After all, he has quite a reputation in the area. From becoming popular to amassing a considerable amount of wealth, he has gambling to thank, to a greater extent.