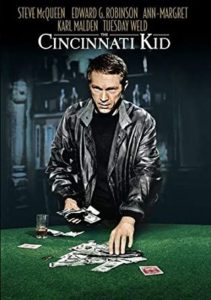 Released by Metro-Goldwyn-Mayer in 1965, at a time when stud poker was still the most popular form of poker in the United States and elsewhere, ‘The Cincinatti Kid’ is a drama fim aimed at poker ‘purists’. The screenplay, written by Ring Lardner Jr. And Terry Southern, was adapted from the novel of the same name, written by Richard Jessup, but the film was set in Depression-era New Orleans, rather than St. Louis. Original director Sam Peckinpah was replaced by Norman Jewison shortly after filming began.

Featuring the tag line ‘He’d take on anyone, at anything, anytime…’, ‘The Cincinatti Kid’ stars Steve McQueen in the title role, as Eric ‘The Kid’ Stoner, an up-and-coming young stud poker player, who seeks to succeed the aging, but ruthless, Lancey ‘The Man’ Howard (Edward G. Robinson) as the undisputed poker kingpin.Throwing caution to the wind, Stoner has his friend and fellow gambler Shooter (Karl Malden) arrange a private game with Howard. In the final hand, Stoner raises Howard $3,500, who re-raises $5,000 and, in a dramatic finale, turns over the jack of diamonds to complete a queen-high straight flush, whcih wins the pot. To add insult to injury, Howard tells Stoner, ‘You’re good, kid, but while I’m around you’ll always be second best.’

Early in the film, Stoner plays penny-pitching, or pitch-and-toss, with an African-American shoeshine boy (Ken Grant) and wins, reminding the boy, ‘You’re just not ready for me, yet!’ In the final scene, as Stoner sinks, shell-shocked, to his knees in the alley outside, the same boy taunts him to play again. He does, but loses, causing the boy to exclaim, ‘You tried too hard, man! You just ain’t ready for me, yet!’