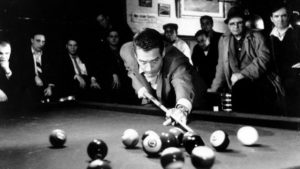 ‘The Hustler’ is 1961 drama film, produced by 20th Century Fox, directed by Robert Rossen and starring Paul Newman, Jackie Gleason, Piper Laurie and George C. Scott, each of whom received an Academy Award nomination. ‘The Hustler’ tells the story of ‘Fast’ Eddie Felson, a cocksure, but highly skilful pool player, who establishes a reputation as he travels the country with his manager, Charlie Burns (Myron McCormick) but, nonetheless, harbours the ambition of beating the best player in the country, Minnesota Fats (Gleason).

Shot on location, entirely in New York City, ‘The Hustler’ devotes roughly one-third of its 134-minute running time to two pool matches between Felson and Fats. In his first encounter with Fats, after 25 hours, despite drinking a whole bottle of JTS Brown bourbon, from the bottle, Felson is $18,000 ahead, but it loses it all by refusing to stop playing until the ‘Fat Man’ says the game is over. Dubbed a ‘born loser’ by Bert Gordon (Scott), a cold, vicious gambler and stakehorse, Felson accepts an offer to be taught how to play ‘major league’ pool; his ‘education’ involves, at one occasion, having his thumbs broken for flaunting his talents to a less hustler.

Nevertheless, the path inevitably leads him back to a rematch with Minnesota Fats and, in the final showdown between the two, a focused and sober Felson stakes his whole $3,000 bankroll on a single game. Felson wins that game and many more, so many, in fact, that as the hands of the clock reach six o’clock Fats concedes defeat. Felson launches into an emotional criticism of Gordon, which effectively costs him his future as a big-time pool player, but he and Fats part on gracious terms.