Movies – Two For The Money 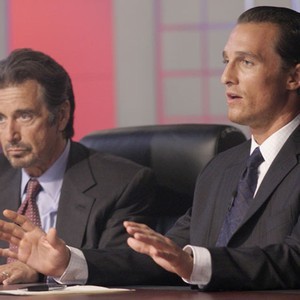 Distributed by Universal Pictures in 2005, Two for the Money is a sports drama film starring Al Pacino, Matthew McConaughey and Rene Russo. Brandon Lang (McConaughey) is a former college football star who, after suffering a career-ending knee injury, is reduced to a telemarketing role, predicting football results on behalf of gamblers. Nevertheless, the remarkable accuracy of his predictions attracts the attention of Walter Abrams (Pacino), head of a thriving sports trading websites with its own cable television show called ‘The Sports Advisors’.

Abrams recruits Lang, who moves from Las Vegas to Manhattan, where his whole image is overhauled to create an entirely fictitious, but nonetheless slick, persona, by the name of ‘John Anthony’. Lang, as John Anthony, is added to the roster of regular pundits on ‘The Sports Advisors’, much to the annoyance of previous ‘blue-eyed boy’ Jerry Sykes (Jeremy Piven), and proves an immediate success.

However, seduced by the trappings of his newly-found high-rolling lifestyle, Lang becomes complacent in his work, relying on hunches rather than his knowledge of the game, with predictably disastrous results. At one point, he is physically assaulted by associates of a disgruntled client. Abrams, a recovering, but by no means recovered, alcoholic and gambling addict, soon turns on his protégé and even suspects that Lang is having an affair with his doting wife, Toni (Russo). The relationship between the two men disintegrates, irrevocably, as they try to outsmart each other. Lang does make two successful predictions for the Super Bowl, both made tossing a coin, but leaves Abrams to pursue a less glamorous career, coaching junior league tackle football.