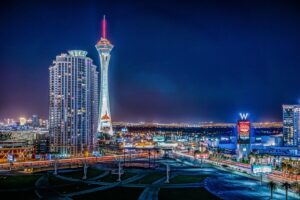 Backgammon is a gambling game but, notwithstanding high-profile tournaments, such as the Backgammon World Championship, which is held annually at the Fairmont Hotel in Monte Carlo, Monaco and offers $250,000 in prize money, is not really a viable proposition for bricks-and-mortar casinos. Traditional backgammon is a board game that can accommodate just two players and requires no dealer, so is better suited to private cash-only contests than regular casino play. A table game, known as Casino Backgammon, did make a brief appearance at O’Shea’s Casino in Las Vegas, in the days before its closure and relocation, but lacked the skill component of traditional backgammon and did not last long.

Traditional backgammon is played on board divided into four quadrants, known as the home, or inner, board and outer board for each player, each of which contains six, alternately-coloured triangles, or points, making a total of twenty-four. A raised ridge down the centre of the board separates the home boards from the outer boards. Each player starts the game with fifteen counters of a particular colour – typically black, or red, for one player and white for the other – arranged on the board in prescribed fashion.

Players have their own pair of dice, which they roll in turn, with the object of moving all their counters into their home board and bearing them off, or removing them from the board. The first player to do so wins the game. A single counter standing alone on a point is known as a ‘blot’; if an opposing counter lands on the same point, the blot is said to be ‘hit’, placed on the bar and must be ‘entered’ into the opposing home board, according to the dice roll on the next turn.