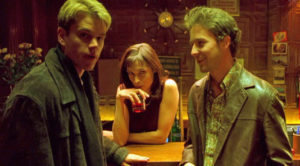 Miramax Films’ ‘Rounders’ is a 1998 crime drama film directed by John Dahl and starring Matt Damon and Edward Norton. In the days before playing poker for a living became socially acceptable, ’rounders’ were professional gamblers who, quite literally, ‘made the rounds’, travelling from place to place in search of high-stakes ‘underground’ poker games.

Mike Mcdermott (Damon) is a brilliant, intuitive young poker player, but the opening poker scene in ‘Rounders’ sees him looking on, breathless and unbelieving, as he loses everything, including his law school tuition fees, to ‘mad Russian’ Teddy ‘KGB’ (John Malkovich) in a hand of Texas hold’em. Rejecting an offer by his mentor Joey Knish (John Turturro) to stake him, on a 50:50 basis, while he rebuilds his bankroll, McDermott abandons poker in favour of law school, much to the delight of his girlfriend Jo (Gretchen Mol).

However, following the release from prison of his childhood friend Lester ‘Worm’ Murphy (Norton), McDermott feels obligated to help his friend repay his gambling debts, worth $15,000, and is drawn back into the New York underground poker scene. However, having tried, and failed, to raise the money, the pair part company, on hostile terms, when Murphy confesses that he owes the money to none other than Teddy ‘KGB’.

Nevertheless, as co-guarantor, McDermott still needs to raise the money and, assisted by a $10,000 loan from his law school professor Abe Petrovsky, his path inevitably leads towards a final showdown with Teddy ‘KGB’. In fact, Mcdermott wins not one, but two, heads-up matches against his nemesis and, in so doing, wins enough money to repay all his debts and restore his original bankroll. Finally, he heads off the Las Vegas to pursue his ‘pipedream’ of playing in the World Series of Poker Main Event.