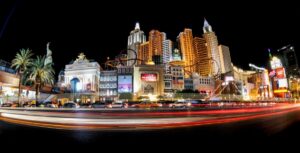 Pachinko is a mechanical gambling game, which originated in Japan in the years following World War II and has since developed into an industry with an annual turnover of ¥21.5 trillion, or $200 billion. Indeed, Japan is home to tens of thousands of pachinko parlours, which are largely the preserve of the Korean Japanese, who were excluded from the traditional workforce in the post-war years.

Pachinko is akin to pinball, insofar as it involves launching steel ball bearings into the machine, but is played vertically, rather than horizontally. The word pachinko is the diminutive form of the Japanese word ‘pachin’, which describes the natural clicking sound the machine make. Players insert money, push the so-called ‘tamakashi button’ to release a fixed number of balls into the upper ball tray and gently rotate a handle to start firing them into the machine.

The idea is that as many balls as possible negotiate the pin maze and drop into the main prize hole, a.k.a. the ‘gate’, in the middle of the field of play. Too little, or too much, pressure on the handle may result in balls missing the field of play altogether and only a small percentage of those that do make it – perhaps 6% or 7%, on average – will enter the gate. Nevertheless, each ball that does enter the gate wins additional balls, plus a spin of the reels, which provides an opportunity to hit a bonus, including the jackpot. At the end of a playing session, winnings, in the form of balls, are tallied by a member of staff, who creates a receipt that can be redeemed, for prizes large and small, at the prize counter.