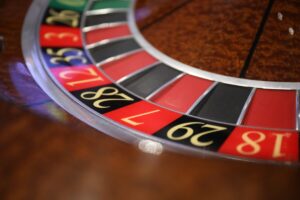 ‘Roulette’ is the diminutive form of the French word ‘rouelle’, meaning wheel and, although based on older games, was first referenced by its modern name in Bordeaux, in southwestern France, in the early eighteenth century. Roulette is played with a convex, solid wooden wheel with 37, 38 or – since the advent of so-called ‘triple zero’ roulette in 2016 – 39 red and black numbered pockets. A croupier spins the wheel in one direction and, while it is revolving, spins a small ball, colloquailly known as the ‘pill’, in the opposite direction around the running rail on the rim of the wheel. The roulette ball must complete at least three full rotations of the wheel.

Players bet on where the ball will come to rest by placing casino chips, or tokens, on a baize or felt-covered betting area, known as the ‘layout’, marked to correspond with the compartments of the wheel. So-called ‘inside’ bets include a ‘straight up’ bet, on a single number, a ‘split’ bet, on two adjacent numbers and a ‘street’ bet, on a row of three adjacent numbers. Alternatively, so-called ‘outside’ bets allow players to bet on the ‘type’ of number on which the ball will come to rest. Red/black and even/odd are the most basic outside bets, but other examples include ‘column’ and ‘dozen’ bets, which both cover twelve numbers apiece, depending on their position on the layout, or numerically.