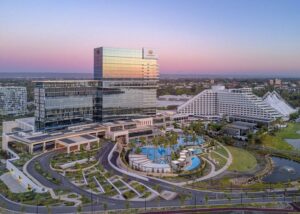 Crown Resorts has had an interesting timeline in 2020, reopening its resort location in Perth in June and planning on the much-anticipated casino grand opening in Sydney for December. Both optimism and controversy have flanked the reopening in Perth, with Crown Resorts hoping that its initial success was a good omen for recouping lost time and revenue.

However, with coronavirus precautions potentially stretching well into the new year, the casino operator may have anticipated the change too soon.

The Crown Perth location offers a world-class convention center, hotels, food and beverage services, casino gaming options, entertainment, and tourism services. Along with Perth, Crown Resorts has a location in London and Melbourne. The Melbourne casino will remain closed through the rest of the year, in part due to an outbreak of coronavirus that occurred in July, just after the Perth location reopened.

Although the Crown Resorts location in Sydney has yet to be finished, it is on the fast track for completion within the year and is intended to open as a VIP exclusive casino. It is set to be only the second casino in operation in Sydney.

Working with the Western Australian government, Crown Perth reopened for business in the casino and food and beverage outlets under temporary restrictions. Each venue agreed to observe capacity limits at a maximum of one person per two square meters. To ensure physical distancing on the casino floor every second slot gaming remained off and poker tables had a maximum of five players per table.

Crown Resorts chief executive Ken Barton ensured the dedication to these guidelines, saying “Crown’s priority is to the health and safety of our employees, customers, and the community. The physical distancing and hygiene measures have been developed in consultation with the Government, Commissioner of Police, and Chief Health Officer to allow reopening in a safe manner. We look forward to welcoming back many of our employees and customers to Crown Perth.”

The initial reopening of Crown Perth led to a spike in revenue, up 18 percent from the June reopening date to August compared to the same six-week stretch the previous year. Barton expressed that the rapid success, even with social distancing measures, meant that there was a “pent-up” wealth of gamblers waiting to return to Crown Resorts locations.

Ken Barton had previously said, “We’re confident that once the restrictions are eased, we’ve got enough data points to suggest people will want to come back,” citing the Perth location as proof players will be eager to return to Melbourne as well. Crown Melbourne accounts for nearly 70 percent of earnings for Crown Resorts and its extended closure has been an unwelcome hit to the year’s revenue.

In total, Crown shared that the COVID-19 lockdown had taken a whopping 80 percent from its yearly net profit with much of the loss coming from the lack of table turnover from VIPs and international high rollers. Many of Crown’s employees were covered by JobKeeper subsidies, of which Crown received $111 million by June 30.

Shareholders of Crown Resorts were lucky enough to receive the first half of a policy payment that paid out a 30¢ dividend per share every six months in April, in a move that earned criticism since employees were receiving JopKeeper pay at the time. Major shareholder and former executive chairman at Crown Resorts, James Packer, received $73 million as part of this dividend payout alone. Lawrence Ho, the other majority shareholder thanks to James Packer’s questionable dealings with Crown before stepping down, received a $20 million payout.

Australia has warned that international border closures as a result of a coronavirus outbreak are likely to last well into 2021, and even some internal border closures have been extended to the end of the year. And since live casino offer enhanced experience, online casinos are giving hard time to their land-based counterparts. For Crown Sydney, who plans on targeting VIP demographics and players from mega-casinos like Macau, this does not bode well.

Australia has handled coronavirus concerns relatively well, considering global numbers, keeping their recorded cases just over 27,000 and their total deaths around 900. The geography of the country helped to flatten the curve, allowing authorities to stop the spread by containing international and internal borders.