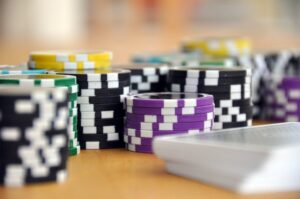 Born in Reading, Berkshire in 1967, Neil ‘Bad Beat’ Channing is best known as a professional poker player. Indeed, his total live earnings of $3,458,652 rank 27th on the England All Time Money List, according to the Hendon Mob Poker Database. Channing collected his best live cash so far, $1,263,261, or €801,400, when winning the Irish Open Main Event at the Citywest Hotel, Dublin in March, 2008 and was unveiled as a Sky Poker Ambassador in November, 2014.

Despite his prowess on the felt, Channing describes himself as a ‘professional gambler‘. He started playing poker, recreationally, as a youngster and, in his early twenties, graduated to playing tournament poker, albeit sporadically, at the Grosvenor Victoria Casino, London. Although, by his own admission, he was not the most attentive student, Channing graduated from the City of London Polytechnic with a degree in economics, by which point his focus had reverted to his first love, horse racing. He spent several years on the racecourse, making a decent living from placing and taking bets but, in his late twenties, his fortunes took a turn for the worse and he was forced to seek alternative employment.

Channing subsequently joined City Index, where he demonstrated a natural aptitude for spread betting, as an odds compiler and as a punter. Indeed, when he was made redundant, he opened an account with his former employer and won £140,000 in a nine-month period. Inevitably, his account was closed and he was also banned by Grosvenor Casinos for winning ‘a bit too much money’. Nevertheless, he continued to play tournament poker, with no little success, at Russell Square Casino, London – in the days before it was acquired by Grosvenor Casinos – but resisted the temptation to turn professional because of his involvement in other gambling ventures.

Channing formed a lucrative horse racing syndicate, such that, by the age of 33, he never had ‘less than a few hundred grand’ in his current account. In 1998, the deregulation of bookmakers’ pitches presented a new opportunity and he invested heavily in pitches at racecourses nationwide. However, the abolition of off-course betting tax, in 2001, coupled with the rise of online betting, sounded the death knell for that venture and Channing turned, once again, to poker, but this time as a full-time career. He was re-admitted to the Grosvenor Victoria Casino, albeit as a guest, where he played high stakes Omaha with money he ‘couldn’t afford to lose’.

Through thick and thin, Channing continued to visit Las Vegas for the World Series of Poker (WSOP), whether or not he could sensibly afford to do so. He collected his first live WSOP cash, $8,895, for finishing seventeenth in a Texas Hold’em event at Binion’s, Las Vegas in May, 2001, in the days when the fields were smaller ‘but everybody was a good player.’ Channing has yet to win a WSOP bracelet, but went agonisingly close to doing so when beaten in heads-up play by American Henry Lu, in a field of 2,770, in a No Limit Hold’em event at the Rio All-Suite Hotel & Casino in June, 2012.