Professional Gamblers – Music to my Ears 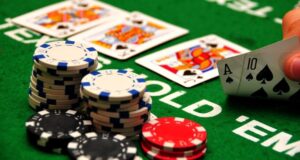 It’s a funny thing really, people often have very stark views of gambling, in either the positive of negative. They either tend to see it as a bit of harmful fun or in contrast to that some kind of hedonistic hellscape. Realistically while some types would be better served to steer clear, most people know full well how to find the right balance in most areas of life including gambling. Here at HotChip we tend to focus on the characters (Daniel Negreanu , Amarillo Slim  etc) , venues and games that all form part of casino life, rather than have a gungo attitude towards gambling. We find that suits casual players and the more focused individuals alike.

Another common misconception is the idea that there is no such thing as a professional gambler. There are certainly games that are much more chance based, but even in those – roulette for instance – it’s possible to employ strategies that help you to walk away when you’re winning and limit your loses when you’re not. The problem most casual gamblers have is that they have little understanding of odds, and also typically increase the wager the more they win, rather than maintain a balanced approach regardless of the fortunes of any particular spin or result. If you’re always pushing it, even if you’re on the winning streak of a lifetime eventually it’ll end and you’ll pay the price. Better to adopt a steady and sure approach. This sounds like it should be second nature and common knowledge, but that’s far from the case.

Some casino games are of course more skill based than not, or at least it makes up a meaningful component of the game. Poker is definitely such a casino game, and surely no-one would deny the existence of professional gamblers and successful players within this age old card game. It’s a truism, as over the decades many players have become world famous due to their successes. Sports betting is of course another area where people can spend years honing their skills (football, horse racing and so on) and analysis until they reach a point of having a very clear advantage over the layperson. There are so many areas of sport than can be bet on, that it makes sense that some will become very focused and skilled in a particular area and benefit from this. These individuals often stay under the radar but that certainly doesn’t mean that they aren’t out there! It doesn’t always benefit you to advertise your successes!